The main auditorium is 487×288×137 feet with a floor area of 140,000 square feet, giving a volume of 5,500,000 cubic feet. Consequently, the organ runs on much higher wind pressures than most organs in order to achieve a volume loud enough to fill the hall. 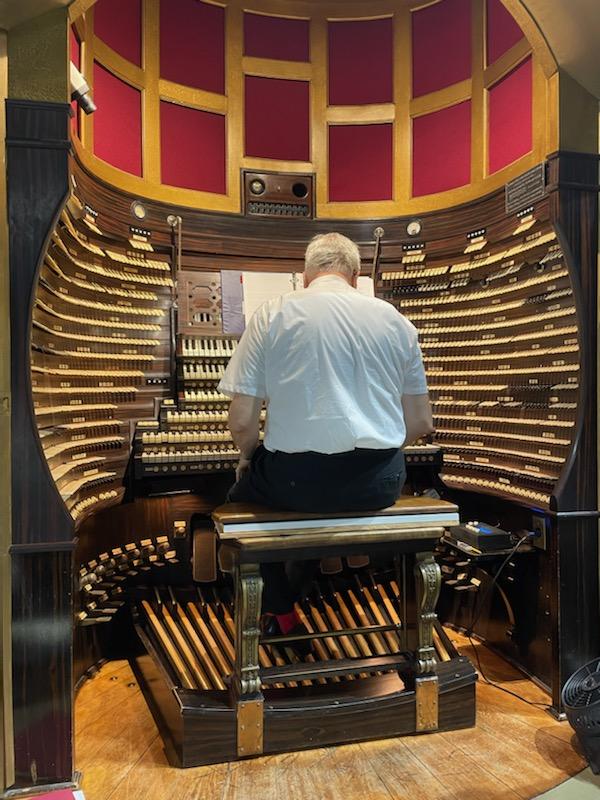 With an instrument that large, it takes someone with huge talent and confidence to make her sing. And, who better than our own Marc Cheban!

“During the 2017 Christmas Season one of the gentlemen that works on the Atlantic City Boardwalk Hall organ was at one of my sing-alongs at Longwood Gardens. After the program he approached and asked if I could maybe play on the Atlantic City organ the following Christmas. I was enthusiastic in my response. Sure enough, I played a number of times during the 2018 season on that organ. I guess they liked my style and the type of music I played and they asked me if I would be willing to play one day each week during the summer season. So I chose Tuesdays; that Summer I played every Tuesday from Memorial Day through the end of September. I played there again during the 2018-19 Christmas season but that was the last time that any of the organists played until this month, due to Covid.”

“The gentlemen that work on the organ are so lovingly devoted to ‘her’ that I was hooked the very first time I played there. However, because that organ and its console (where the organist sits) were built before there were specific console dimensions, it is physically challenging for me to play, since most days I am tall and that console was not designed to accommodate a tall organist. But I still love every minute of it.”

We are asked to give of our time, talent and treasure. Here are ways we can give to the greater glory of God. Learn more

Join our mail list by writing to StThomassOffice@googlegroups.com. And, join us on social media at