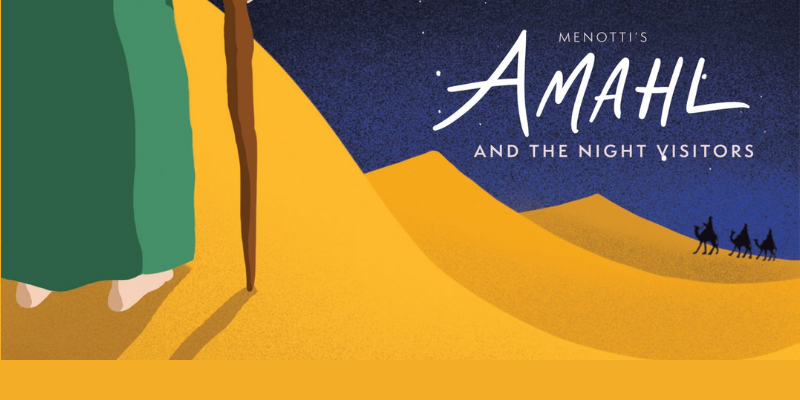 This Sunday evening, December 4, 2022, at 5:00 p.m., Marc Cheban, our organist, will lead us through “Amahl and the Night Visitors”: a one act opera. This sounds like a fun and fascinating evening that you won’t want to miss out on. It will run about one hour.

Based on Italian folk tales of the Nativity and Epiphany, Gian Carlo Menotti’s Amahl and the Night Visitors is a retelling of the story of the Magi from the point of view of a young disabled boy named Amahl, who lives in poverty with his widowed mother near Bethlehem.

He sees a bright star in the sky one night and tells his mother to go look, but she brushes him off, buried in concern over their bleak future and lack of means with which to support themselves. That night, three kings come across their meager hut and seek shelter, for they have traveled long and far following the star of which Amahl had spoken. They bring with them treasure and gifts to give to “the Child” who has just been born and who will reign over all. Blinded by the lure of the gold and what it could do for her family. the Mother attempts to steal just a bit of the treasure, but is caught red-handed. What no one expects is a gift far greater than gold–blessed by the Child, Amahl finds himself suddenly cured of his disability. A vivid and accessible tale originally created for television, Amahl and the Night Visitors is a perfect first opera–or hundredth!

We are asked to give of our time, talent and treasure. Here are ways we can give to the greater glory of God. Learn more

Join our mail list by writing to StThomassOffice@googlegroups.com. And, join us on social media at